This cruise, taken in March/April 2018, was booked with Iglu Cruises and comprised a 3 night stay at the Accra Resort Hotel in Barbados followed by a 14 night West Indies cruise on the MSC Fantasia.

We flew from London Gatwick to Grantley Adams airport in Barbados arriving early evening. After clearing customs and collecting our luggage we were transferred to the Accra Resort Hotel by private taxi. We were quite tired after our day’s travelling and went to bed soon after unpacking.

Due to the time difference with the UK, we were awake by 5am and sat on our balcony watching the sunrise. As soon as the shops were open we went to the supermarket across the road and bought some food to make a packed lunch. We then headed for the beach.

The Accra Resort Hotel has direct access to the beach and provides towels for use on the beach. There are plenty of sunbeds and umbrellas free of charge on the beach. 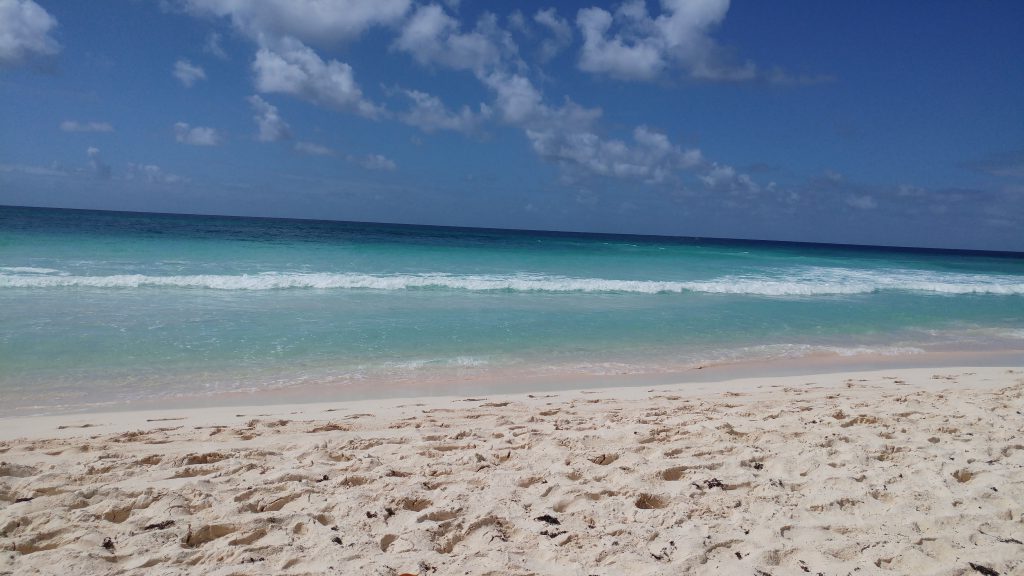 The beach was exactly as we expected with plenty of sand and clear blue sea. However, we had not expected it to be as windy as it was nor for the sea to be as rough. We later found out that the Atlantic coastline of all the Caribbean islands are windy with crashing waves. Nevertheless the sun was hot and we enjoyed a lazy day on the beach.

On our second day in Barbados we decided to go out and see the island. We had booked tickets for Harrison’s Cave and decided to travel by public transport. We took a yellow bus to Bridgetown then took a blue bus to Sturges which stopped right outside the entrance to the caves.

We had opted to take a tram tour of the caves and the caves themselves are quite impressive with plenty of stalactites and stalagmites. However, our guide spoiled the trip slightly by making jokes that nobody found funny. 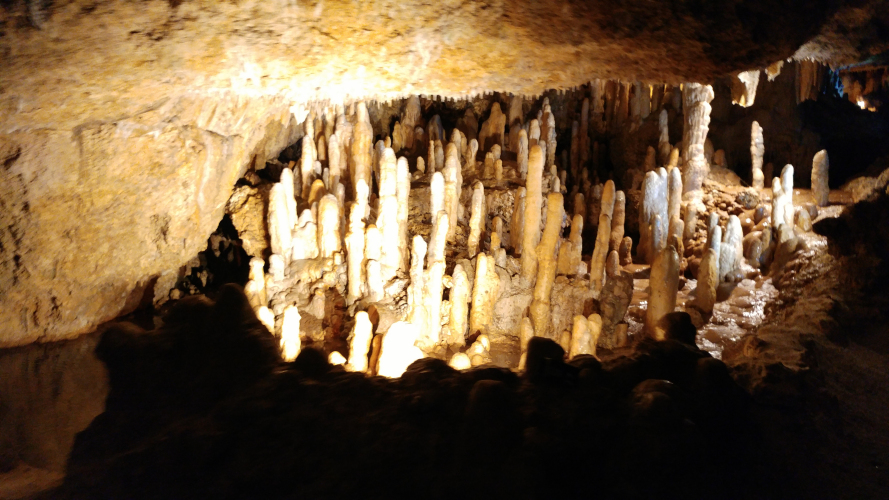 At the end of the tour we spent a little time looking at the kiosks around the cave entrance and also the attraction shop. We then took the bus back to Bridgetown. The bus journey both ways was great as it enabled us to see the countryside and also to see life in Barbados.

After a walk around Bridgetown we returned to our hotel. The following morning we were picked up by private taxi and taken to the port where we boarded MSC Fantasia.

Our first port of call was Port of Spain, Trinidad and Tobago. The UK government advises not to travel in the country alone so we booked a ship excursion. We opted to take a jeep trip and see some of the island.

We were taken by bus to a meeting point where we boarded jeeps. We were first taken up a very steep hill to a church high on the hill where we were told a little about the church before being given rum punch and cake. 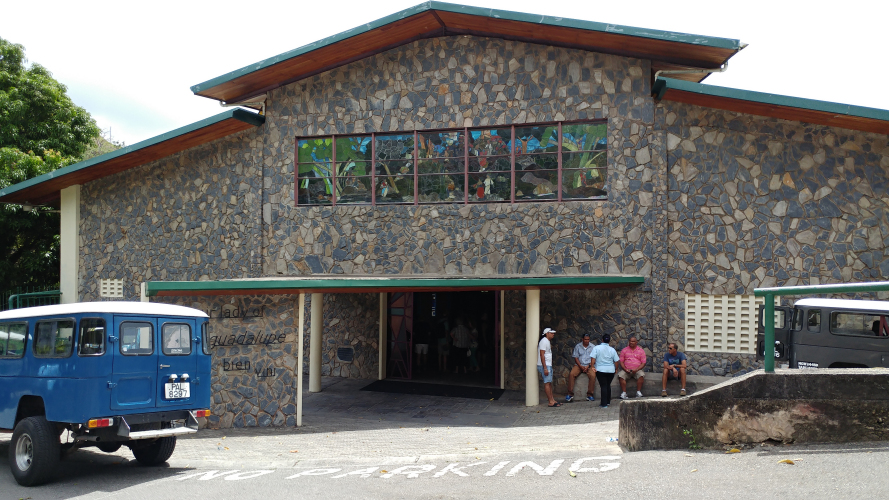 Our next stop was a viewpoint at the top of the hill. 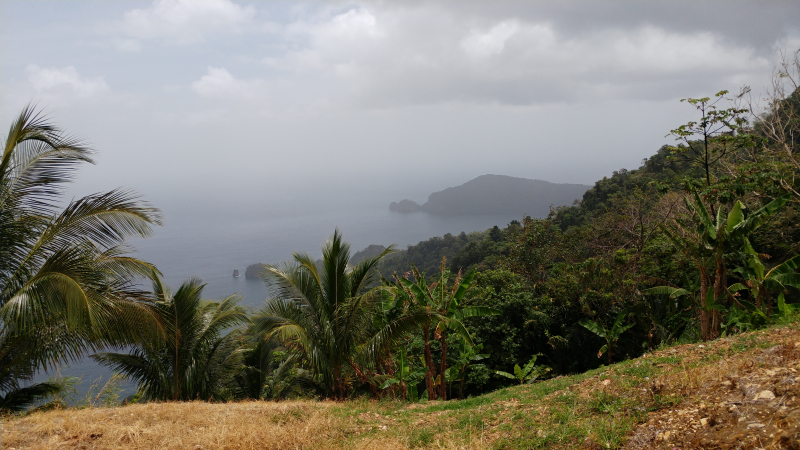 After spending some time taking photos we were back on the jeeps and heading downhill to Maracas beach, our final stop. The beach is said to be the best on the island but we were not over-impressed. While there was a lovely sandy beach and the sea was clear and blue, the area wasn’t particularly clean. We spent an hour and a half at the beach before heading back to our ship.

We booked the Creole Bus Sensation Tour for our stop at Grenada. We boarded the wooden seated, open-side, colourful bus and set off for our first stop – St George’s Fort. The fort was initially built by the French before being taken over by the English. After climbing to the top of the fort we were told more of its history and had the chance to enjoy the stunning view. 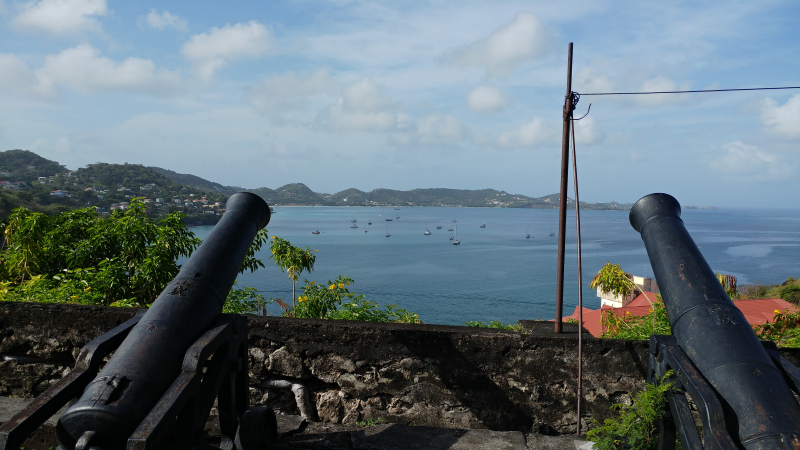 After visiting Fort Frederick we went on to Mont Rouge Beach (known locally as the BBC Beach) where we enjoyed a cooling swim. On the drive to the beach our guide gave us a lot of information about the history and culture of the island. 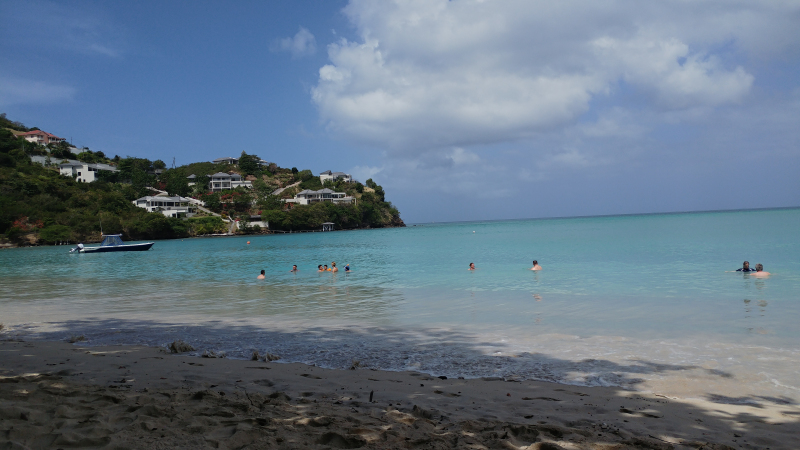 Here we took an open bus tour with Austin Powers Tours which took us round most of the island. Our guide was very informative and pointed out places of interest. We made two stops for photos at the east of the island and in the west where we could see the Atlantic Ocean on one side and the Caribbean Sea on the other. 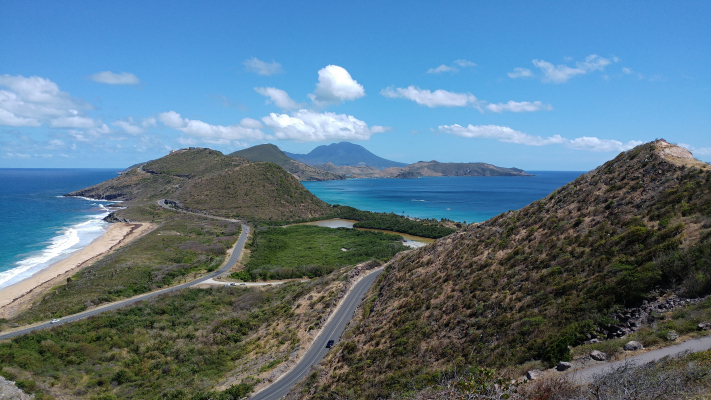 We made a final stop at the beach where there was an opportunity to stay at the beach and be picked up later.

Today we took the ferry from Fort de France across the bay and then took a taxi to La Savane des Esclaves, a purpose built museum telling the history of slavery on the island.

The museum is the work of Gilbert Larosse who wanted the plight of the Martinique slaves remembered. The guided tour is only available in French but the display boards around the museum are written in English and French. 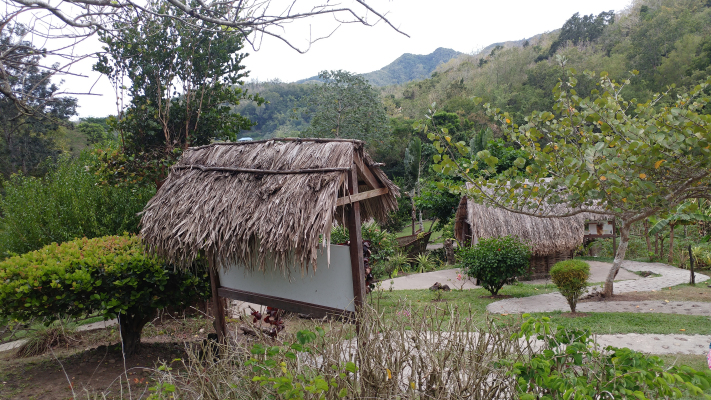 There are a number of huts built and furnished as they would have been during the slave period. There is also good information about how freed slaves lived.

We docked at Guadeloupe on a Sunday. We had not booked a trip so disembarked the ship and decided to take a walk around Pointe de Pitre. We walked for a short way and took a few photos but the shops were closed and the streets deserted so we returned to the ship. 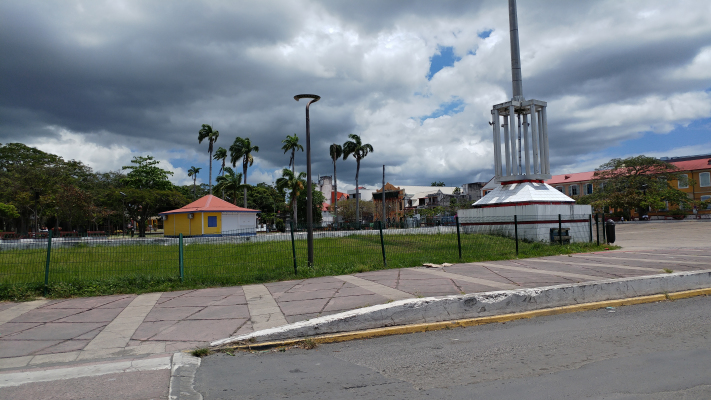 We got off the boat and walked through the street looking at market stalls. While we were browsing we were approached by a taxi driver who asked if we would like a tour of the island. We negotiated a mutually acceptable price and set off on our drive. Our driver was very knowledgeable and told us a lot about the island as we drove along. He slowed down for us to take photos and at particularly picturesque places like Nelson’s Dockyard, he stopped so that we could get out and take photographs. 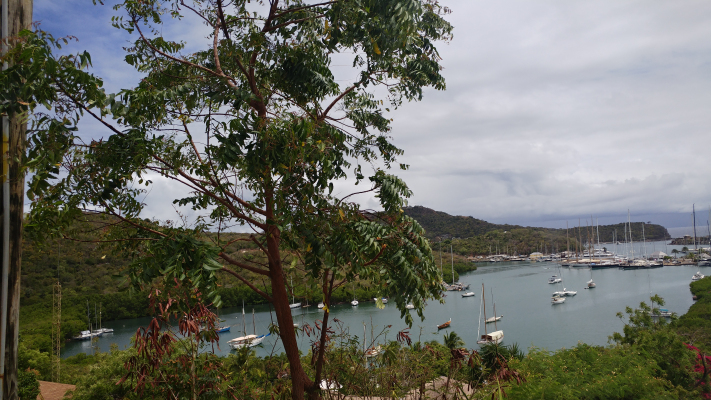 St Vincent and the Grenadines

We disembarked our ship and took a taxi tour with another family. Firstly we went to the botanical gardens which cost 5 Eastern Caribbean dollars without a guide. The gardens feature many plants native to the Caribbean and there are paved and grass areas where you can walk round. There is also an aviary in the park which features cockatoos and parrots as well as the endangered St Vincent Parrot. 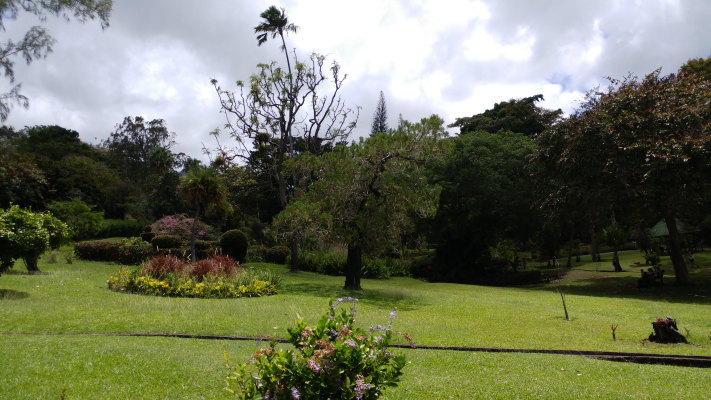 After leaving the park we went to Black Point Cave which was made to transport sugar cane to transport ships. Our guide pointed out interesting features on the journey and also told us about the history of the island and its slave trade. We were able to walk through the cave which was built by slaves and get an idea of what it would have been like in the past.

We opted to take a Monster Truck Safari. We were picked up at La Romana dock and drove away from the dock along a dual carriageway. Our first stop was a sugar plantation where our guide cut some raw cane for us to try. 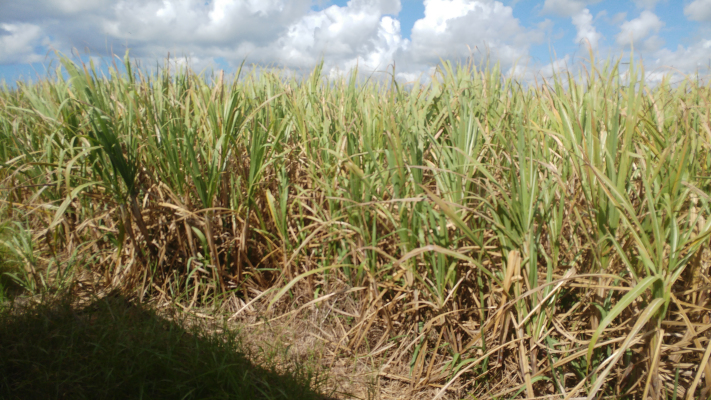 We were then given a rum and coke for the drive to a smallholding where we were shown various tropical fruits. We were given samples of fruits before being ushered into the souvenir shop.

Next stop was a local school where we saw the children at work. There was another souvenir shop and for those that wished you could purchase a bundle of basic items for the children. Unfortunately our guide did not explain this properly and many people who would have purchased didn’t because understand what it was. Our final stop was a very small cigar factory where girls were hand-rolling cigars that were sold in the adjoining shop.

On this visit we took a taxi from the port to Frigate Bay which cost us 2 Eastern Caribbean dollars each way.

Frigate Bay is a lovely quiet beach with clear water where fish swim around your feet. The beach is shared by a hotel resort and part is reserved for hotel guests but there was plenty of space. It was also possible to hire sunbeds and umbrellas for the day. 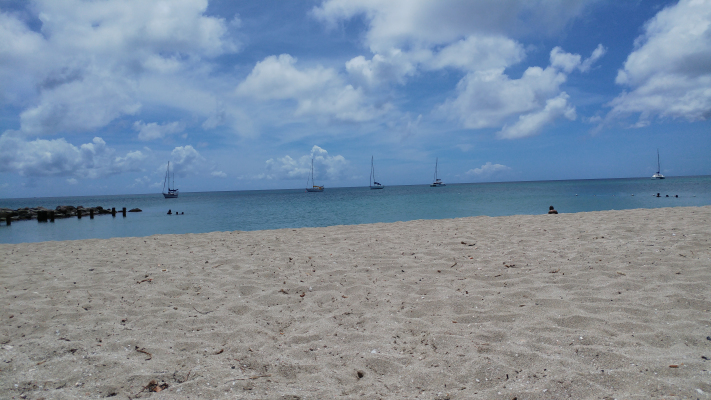 We took a motor boat tour with Papa Tours. After boarding our boat we headed off along the coast of Saint Lucia to Piton Beach. This is a beautiful sandy beach part of which is reserved for hotel guests but the remainder is open to the public. 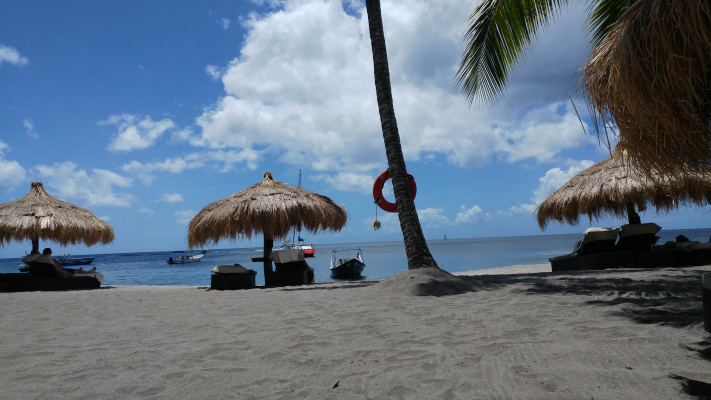 After spending a couple of hours on the beach we returned to the boat and back along the coast. We stopped to see where Dr Doolittle was filmed but we found this a bit pointless as there was nothing there except an overpriced restaurant/bar. On the way back to the ship we stopped at a place where part of Pirates of the Caribbean was filmed before returning to the port.

The next day we returned to Barbados where we disembarked and flew back to the United Kingdom.