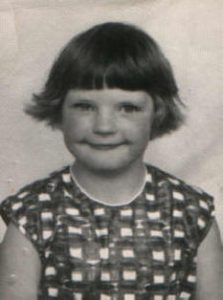 I was born in 1958 in the Buchannan Hospital, Hastings and am the eldest of three children. My father was a shop manager and my mother worked part time as a home help/care assistant.

In September 1962 I started primary school in Crowborough. I enjoyed learning but was quite rebellious and can remember refusing to lie down for an afternoon sleep and questioning why I should have to read to the teacher when she could read for herself.

When I was seven years old my family moved to Rye. This meant leaving my friends behind and starting a new school. However, I soon settled in and made new friends. My most vivid memories of my school days in Rye are writing in italic script with a fountain pen and lessons about ancient Mesopotamia, Egypt and Greece. I was still rebellious and can remember being in trouble many times for refusing to do things I didn’t want to do.

Eager to participate in after school activities, I joined the Brownies, but left after two weeks because I didn’t want to be a  ‘gnome’. I liked singing so I joined the school and local church choirs.

When I was ten years old my church choir made a tour of England. The highlight of the tour was singing on the steps of the newly opened Coventry Cathedral.

When I was eleven years old, my father accepted a new position in Eastbourne so we moved again. This meant another change of school and new friendships to be made. During my secondary school years I became increasingly rebellious and de-motivated by learning. I left school with just three ‘O’ levels in Maths, English and Geography as well as a CSE in French.

College came next where the freer atmosphere made me less rebellious. I studied for a Diploma in Business Studies as well as taking Shorthand and Typing Classes. I also added a further 3 ‘O’ levels in Government and Politics, Law and Accounts.

Having qualified for a life in Business, I decided that was not for me and became a student nurse at Eastbourne District General Hospital. I left home and moved into the student nurse accommodation. I became close friends with a group of nurses and enjoyed a rich and varied leisure time. After qualifying as a nurse in 1979 I worked for two years as a staff nurse on medical wards.

I gave up nursing when I married for the first time but returned to it when my eldest son was a baby. Married for a second time with a second son I decided to become a childminder. When a vacancy came up for a classroom assistant at my eldest son’s school in 1995 I applied for and was offered the job.

After a year I decided I would like to teach. However, to train as a teacher, I needed a degree so I began studying with the Open University. After three years I left the Primary School to work in a Pupil Referral Unit working with disaffected pupils but continued studying for my degree. 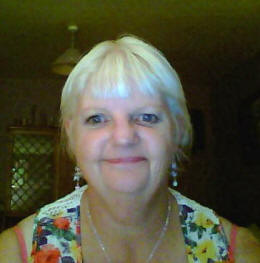 The demands of studying, work and two children led to a second divorce. I eventually gained my degree and in September 2000 began my PGCE training to become a History teacher.

In November 2000 I set up my first History website, History on the Net. The aim of the site was to provide easily accessible resources for my teaching practice.

I took up my first teaching post in September 2001 as Learning Support Unit Manager at Filsham Valley Secondary School working with disaffected pupils. In September 2003 I left the Special Needs department for mainstream teaching and taught Humanities and History full time. I was appointed Head of History in March 2004.

From small beginnings my website, History on the Net, had grown considerably since its launch in 2000. By Autumn 2004, the demands of the website together with the demands of my teaching post became impossible to manage. Not wanting to give up the site, I decided to take some time out from teaching to further develop the website and I left teaching in December 2004. To generate an income I added a website shop selling worksheets and other teaching materials that I self-published.

I enjoy writing for an educational audience and after selling History on the Net in 2013 set up a number of new websites. Some of these sites have been sold to new owners but others I have kept. My most successful website, www.totallytimelines.com currently receives around 50,000 visitors per month and 80,000 page views.

During the lockdown period of the Covid-19 pandemic, I wanted to try a different style of writing and began www.codedyellow.com, an information website about the Pokémon Trading Card Game. This website has grown and now rivals Totally Timelines.

Details of all my sites can be seen on my websites page.

In January 2014 I decided to do some private tutoring to supplement my income. From small beginnings demand snowballed and by March 2019 I was teaching Maths up to GCSE level on a daily basis. I enjoyed the freedom of being able to teach in my own style without the pressure of mainstream targets and deadlines.

Following lockdown I decided to retire from tutoring. However, a year later, I found I missed teaching and returned to private tutoring on a part-time basis.

1066 and the Norman Conquest has always been my favourite period in history and I love living near Pevensey Castle. In 2014 I decided to offer my services as a tour guide and put together a series of walking and history storytelling tours. I have taken many lovely people from around the world on my tours. For full details of the tours available please see my tour website www.1066historian.com.

I have always enjoyed going out and about and seeing new places. As a child we regularly went for picnic outings at the weekend and once a year went off to a Caravan park for a holiday. My first trip abroad was with the church choir when we flew to Le Touquet in France to sing in a concert.

By the late 1970s more people were travelling abroad and while I was a student nurse I visited Lloret de Mar in Spain and Bavaria in Germany. When my children were small we had holidays in the UK but as they grew older, we began making trips abroad. We also spent time visiting places of culture and historical interest.

My passion for travel has not diminished with age and at the end of 2013 I realised a life-long dream and walked on the Great Wall of China. To date I have visited 53 countries and it is now my goal to see as much of the world as possible.

For more information about my travels see the travels page of this site.