We flew to Keflavik airport from Gatwick South Terminal with WOW airlines – Iceland’s own budget airline company. Like other budget airlines WOW airlines offers a no frills service which was fine for the three hour flight. We were able to purchase tickets on board for the Flybus Service which meant we did not have to queue for our tickets at the ariport. As we approached Keflavik airport we got our first glimpse of the Icelandic landscape. 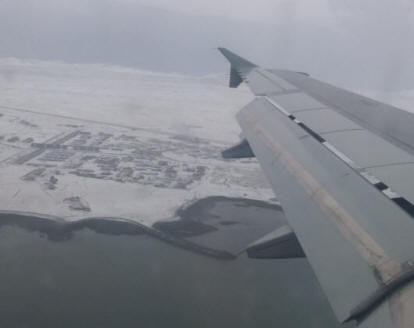 We took the Flybus service from the airport. The Flybus company state that there is always a Flybus to meet every arrival into the airport and that there is no need to book in advance. We opted for the service that drops you at your hotel which cost 2,500 Icelandic Krona (IsK)

We stayed at the Reykjavik Lights Hotel. The hotel is relatively new and the interior reflects the Icelandic landscape with lots of neutral colours, white, black, ochre etc and minimalist decor. Our room was comfortable with adequate wardrobe space, tea and coffee making facilities, a shower room with toilet and a flat screen on the wall TV. The view from the room was stunning and looked out over the sea and mountains. The mountains can just be seen in this picture behind the clouds. 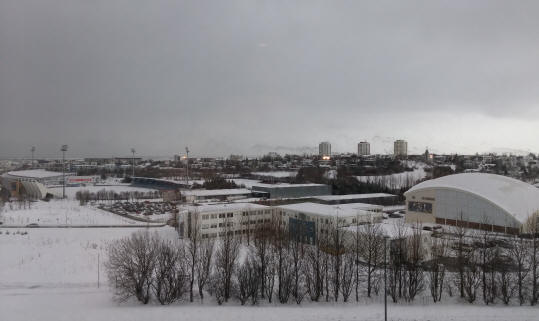 The staff at the hotel were really helpful and were happy to answer any questions we had as well as give us information about the nearest shops, bus times and routes. They also had information about all the tours, trips and excursions that were available in Reykjavik. Unfortunately our trip to see the Northern Lights had been cancelled due to poor visibility so we walked to the 24 hour shop about 10 minutes away and bought some food to eat back at the hotel.

Our hotel stay included breakfast which was taken in a section of the ground floor. There was a choice of three types of cereal and porridge, brown and white bread, jams, butter, fresh fruit, cheese, eggs and cold meat with tea coffee, orange juice and milk to drink.

Our trip today, the Golden Circle Afternoon Tour was running as scheduled and we were picked up from our hotel at 12.30pm and taken to the centre of the city to start the tour.
We were told at the start of the tour that due to the weather this would largely be a black and white tour and we would not see much colour.

Our first stop was the Pingvellir National Park where the Icelandic parliament used to meet. Our next stop was at the spectacular Gullfoss waterfall where the fast moving water falls over two drops creating a two-tier waterfall.

We had to walk a fair distance from our coach stop over a downhill icy path. It was also very, very windy creating a wind-chill of -15C. The combination of cold and wind made it difficult to hold the camera but we managed to get a few excellent shots. 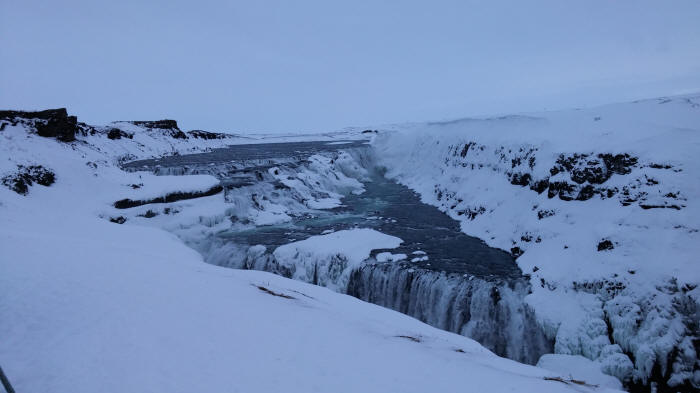 After enduring the cold we had a lovely hot chocolate and a piece of delicious home baked cake at the site’s restaurant/souvenir shop.

Our final stop of the day was at the site of the Geysir. The main geysir spouts a stream of hot water about every 5 or 6 minutes. Although we did witness this we failed to get a good photograph.

The Geysir area also has many other bubbling pools and steamy rivers which we found just as interesting. We also really liked the Little Geysir. As we drove back to Reykjavik over the mountains it began snowing very heavily reducing visibility. At one point it was a total white-out – with no distinction between sky and land and only tyre marks for the coach to follow.

We made it safely back to our hotel albeit an hour late. We later learned that the trip two days before us had been delayed 5 hours due to poor visibility.

We were told in the morning that severe weather was expected later that day and to be prepared.

Our scheduled trip today was a trip on the Elding Whale Watching boat. We wrapped up warmly and took the bus into town. Buses 5 and 15 go directly to the city centre or you can take any other bus and change at the bus station. The price is 400 IsK and you have to have the correct money as no change is given.

Once in the city we made our way to the Old Harbour where we learned that all boat trips had been cancelled and all boats confined to port.

We went into a local cafe for a coffee and then decided to take a walk around the city.  When we came out of the city the weather had changed and was windy and pouring with rain. The rain was melting the snow making everywhere very wet indeed. The wind was driving the rain into our faces but we persevered and took a short walk around the city looking at the local shops 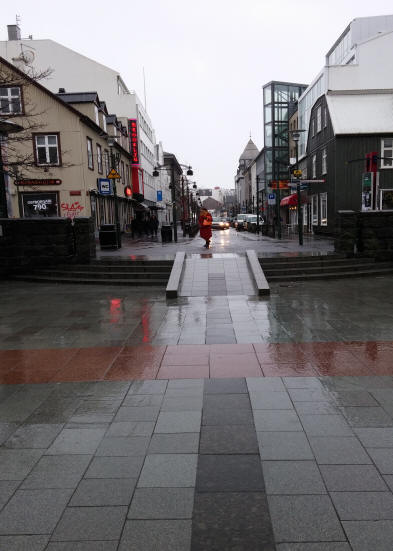 We soon realised that there were very few people about and decided that we should find somewhere to eat and then head back to the hotel. There is no shortage of places to eat in Reykjavik and there are restaurants for all types of food.

Looking out of the hotel window we could see that the landscape had completely changed, most of the snow had gone, the mountains and sea were lost in the mist and clouds and it was blowing a gale. 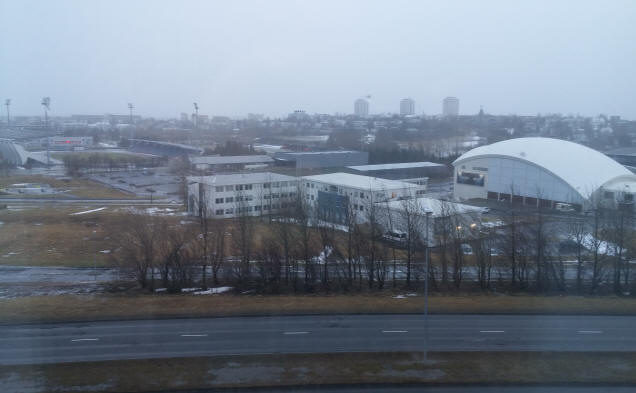 We went down to the hotel lobby to be told that there were no buses running until at least 12.30pm and that the Blue Lagoon was closed until 5pm.

The breakfast area and hotel lobby were packed with people who were confined to the hotel due to the weather. After breakfast we returned to our hotel room where we watched the wind blowing all sorts of debris down the empty road.

Thankfully the wind did die down and we were able to take the 2pm Flybus to the airport for our flight back to Gatwick. Our final view of Iceland was very different to our first view from the aeroplane three days ago.

Although it was a bit disappointing that three of our scheduled visits were cancelled, the continually changing weather and changing landscape gave us a very unique four day Iceland experience that will not be forgotten.

Advice for anyone thinking of visiting Iceland:

Don’t pre-book any tours or excursions –
Trips are often cancelled and if you have booked a package with trips included there are no refunds for cancelled trips. All hotels are happy to book trips for you and most can be booked with just an hour or two notice.

Use local transport –
The flybus from the airport was an excellent service that will drop you at your hotel.
Choose a hotel with a nice view of the mountains and sea –
The weather in Iceland is prone to sudden change and can be extreme. If you are confined to your hotel it will be far more enjoyable if you have a nice view to look out on.

Use the Internet –
Iceland is a very pro-internet country and free wifi is available everywhere, even on the Flybus. You can use the internet to check the weather forecast, book trips or excursions and plan your day.

Wear Layers –
Iceland is a cold country and when the wind blows you have an added wind-chill factor. However, indoors it is very warm. It is therefore vital to wear layers that can be taken off when indoors and put back on when outside.

Food –
Eating out in Iceland is expensive. We paid 1,750 IsK (₤35) for Lasagne, chips and coke for two. Most hotels have kettles so if you are on a budget consider packet soup and thick crusty bread from the supermarket.