This was a short 5 day sightseeing break to Florence and Pisa taken in October 2019.

We flew with EasyJet from Gatwick airport to Pisa. After clearing customs we took the Pisa People Mover to Pisa International Station where we caught a train to Florence. The journey from Pisa to Florence takes about an hour and we arrived at dusk. Our hotel, Casa de Lago was a 15 minute walk from the station. After checking into our room we walked to the nearby supermarket for some snacks to tide us over until breakfast.

After breakfast we headed out towards the iconic Cattedrale di Santa Maria del Fiore in Florence. After walking for about 15 minutes this magnificent view came into sight. 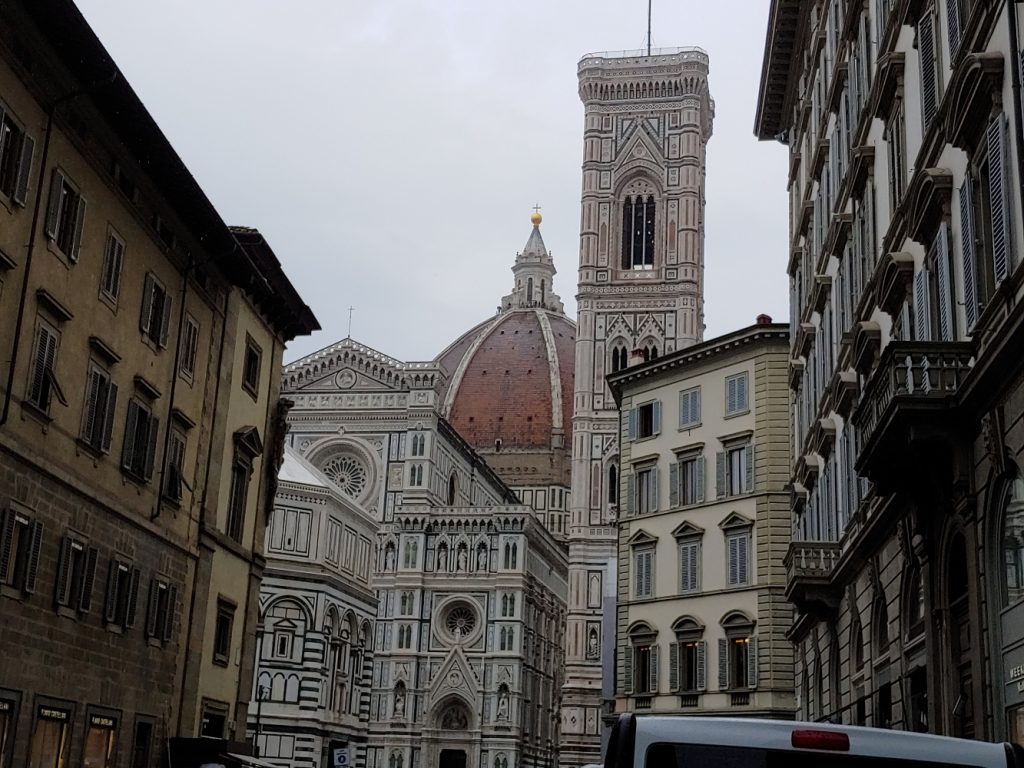 We were unable to get tickets for the Cathedral Tower as they had sold out so we decided to visit the Museum of the Opera del Duomo which tells the story of the history of the cathedral. It was an interesting visit that gave us an insight into the history of this magnificent building. 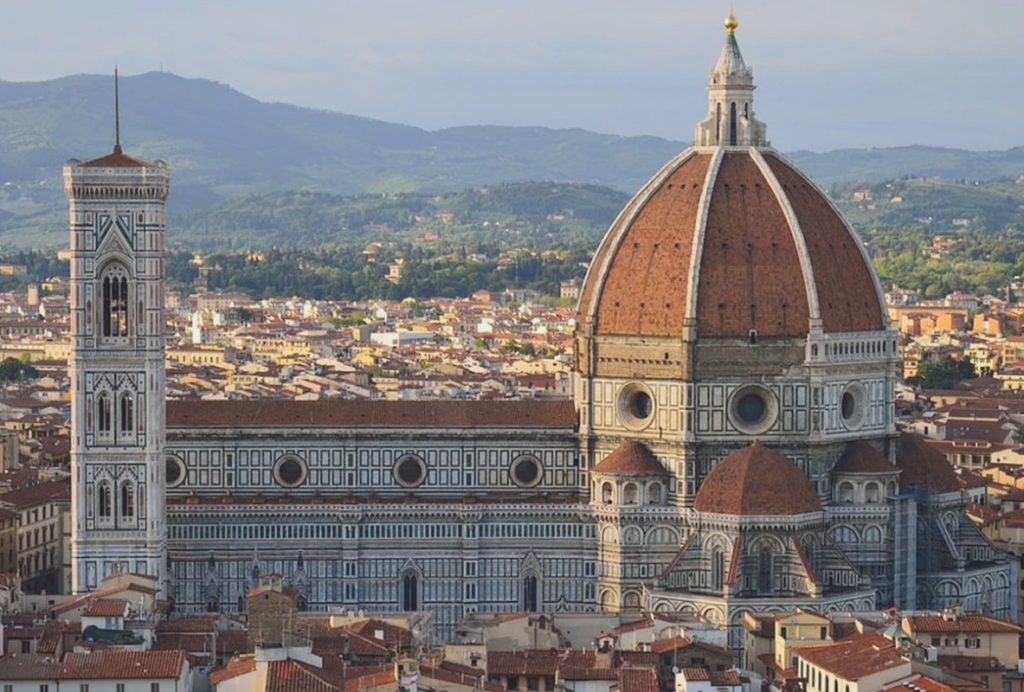 Next we visited Giotto’s Tower. After climbing 468 steps to the top of the tower it was disappointing to have to look at the view through tight mesh fencing. I did, however, manage to slide my phone under the metal barrier to take this close up photo of the dome. 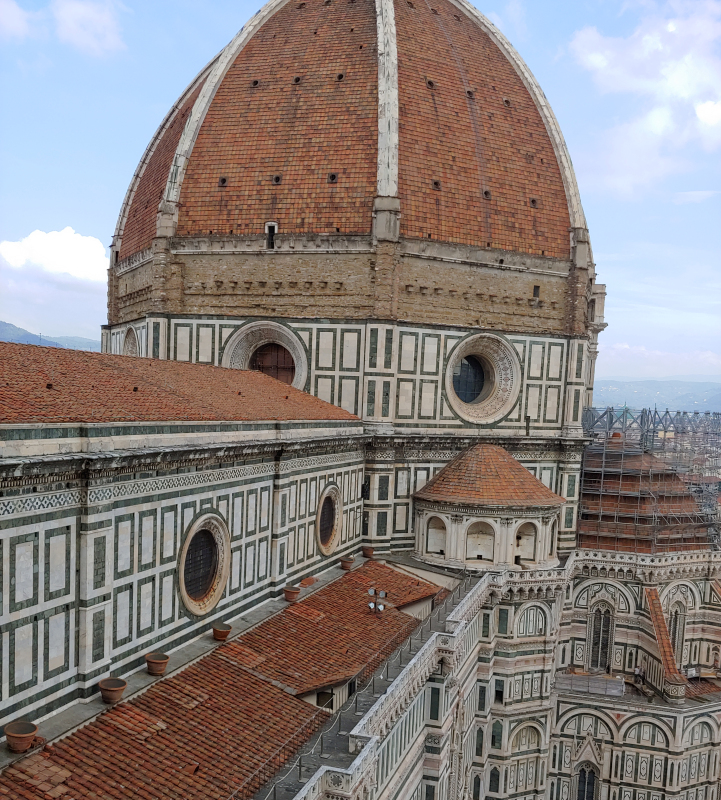 Once we were back on ground level we treated ourselves to some lasagne. Feeling refreshed we went off in search of bargains in the street markets.

We returned to our hotel in the early evening and got changed before going to the Teatro del Maggio to see a performance of the opera Carmen. 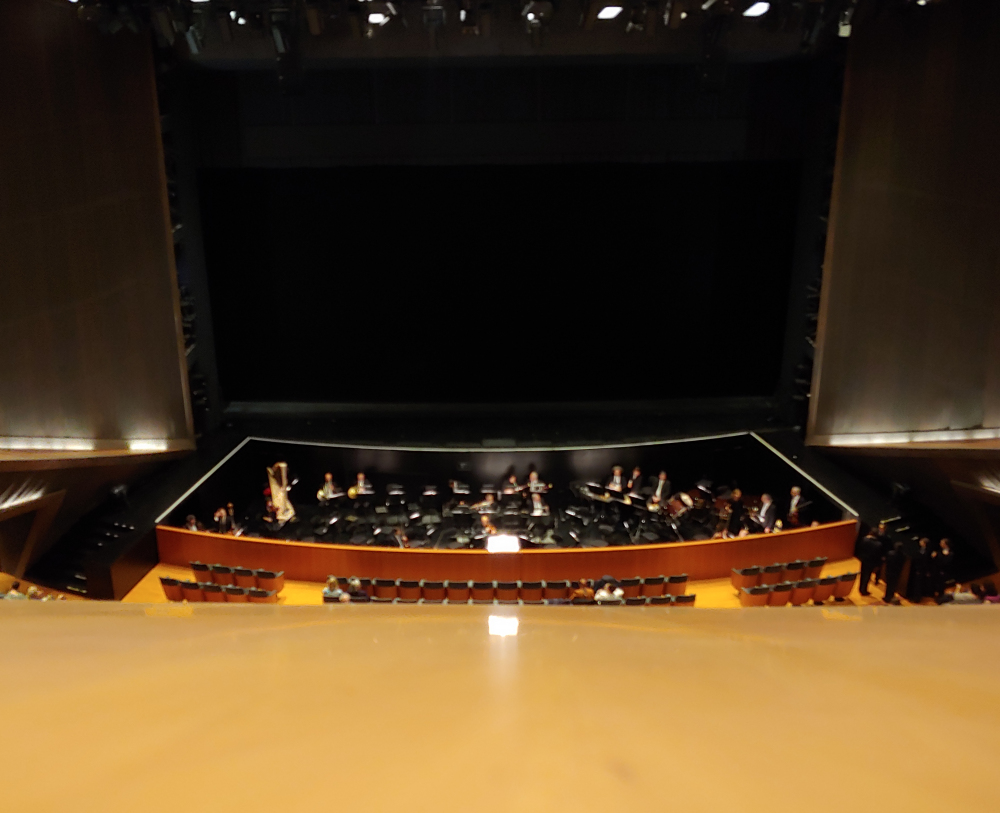 Today we decided to visit the World famous Uffizi Gallery which is located near to the Ponte Vecchio in Florence. 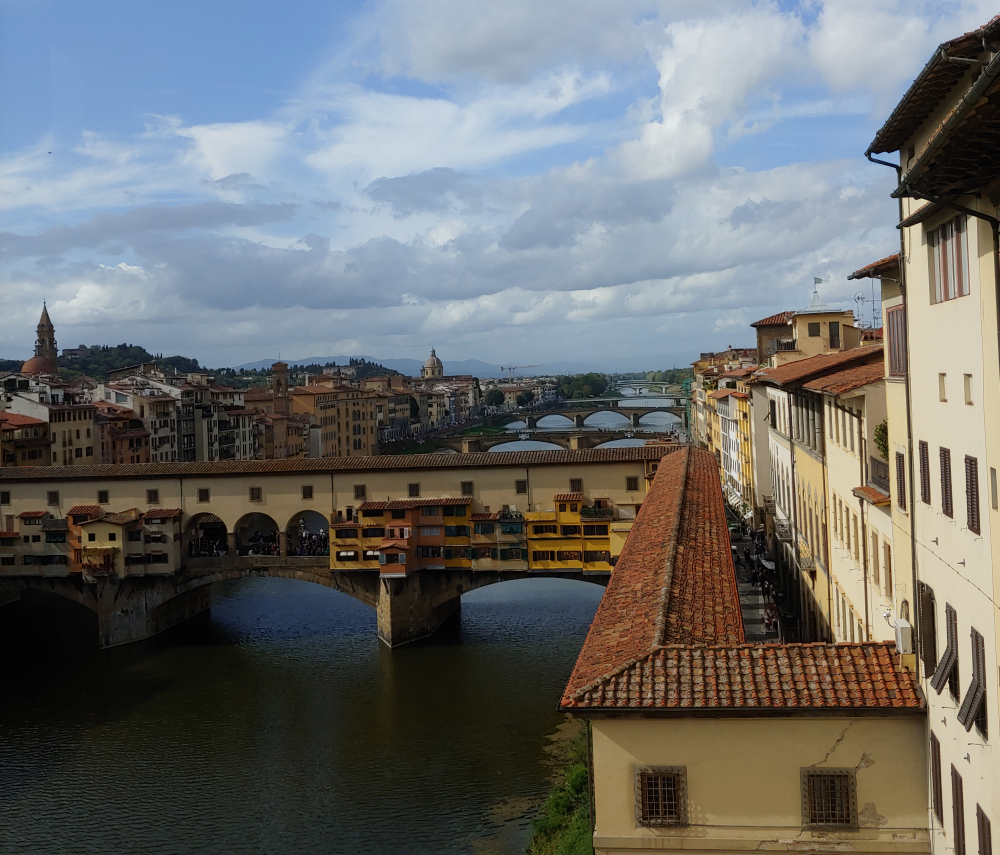 We arrived late morning and purchased combined tickets for the Gallery, the Pitti Palace and the Boboli Gardens. The ticket stated that we had to visit the Palace and Gardens within three days so we decided to do those on day four.

We began our visit as suggested on the second floor of the Gallery then looked at the first floor. The paintings and sculptures are arranged in rooms that branch off a long walkway. Each painting has a caption in Italian and English stating the name of the work, the artist and information. These are a few of my favourite paintings in the gallery. 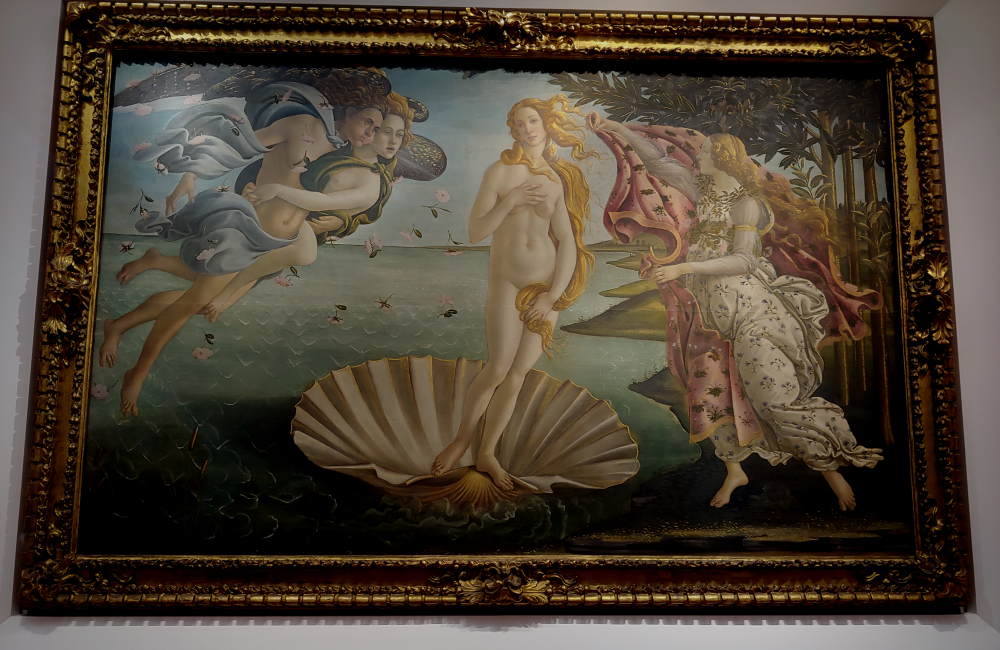 The Birth of Venus by Botticelli 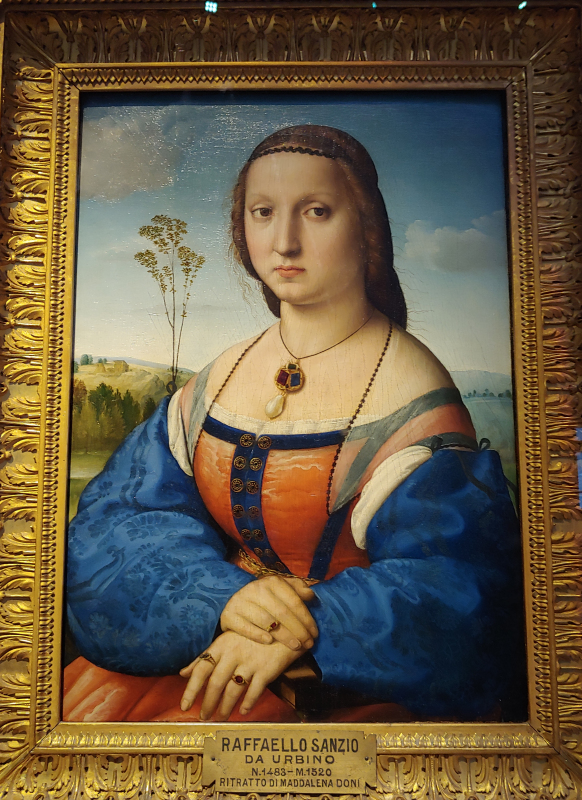 Portrait of Maddalena Doni by Raphael 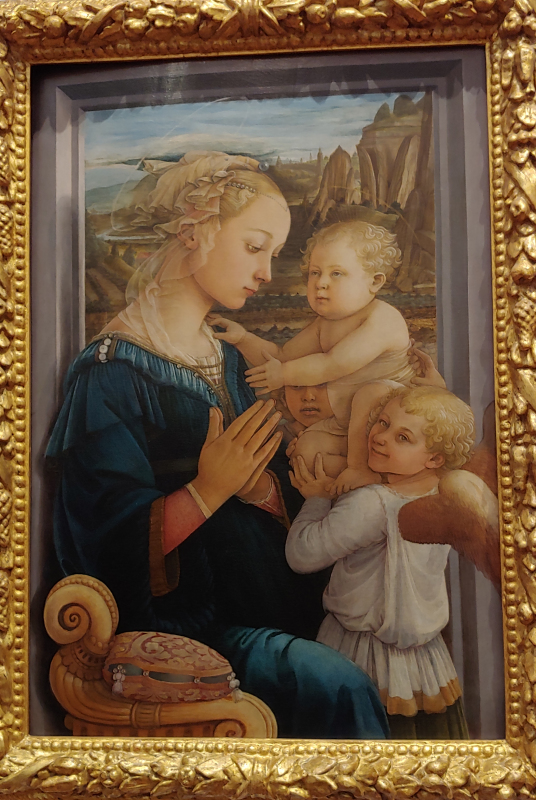 Madonna and Child by Filippo Lippi 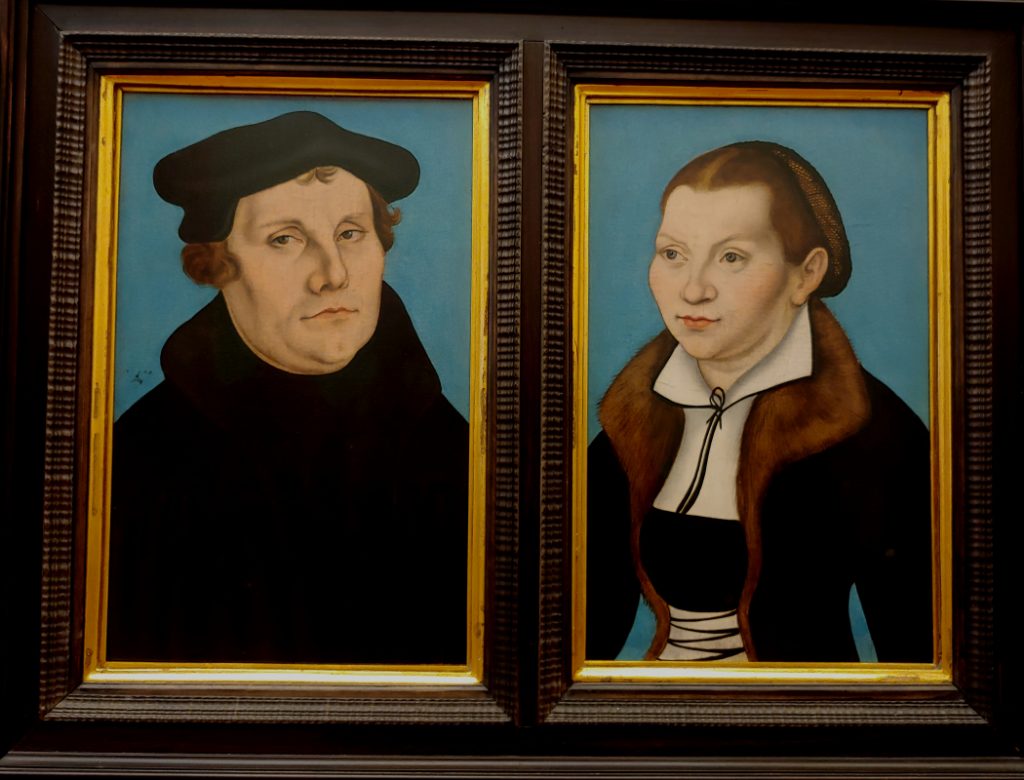 Martin Luther and his wife by Lucas Cranach

After viewing the works of art we visited a display of Jewish heritage with emphasis on fabrics on the ground floor of the Gallery.

It was late afternoon by the time we left the Gallery. We had tickets to climb to the dome of the cathedral so headed back to the centre of the city. The light was beginning to fade so we decided that we would visit the cathedral but not climb to the top. We queued up to enter but then discovered it was the wrong door and that the cathedral itself was shut.

On the way back to our hotel we stopped to have a look at the Church of St Salvadore. 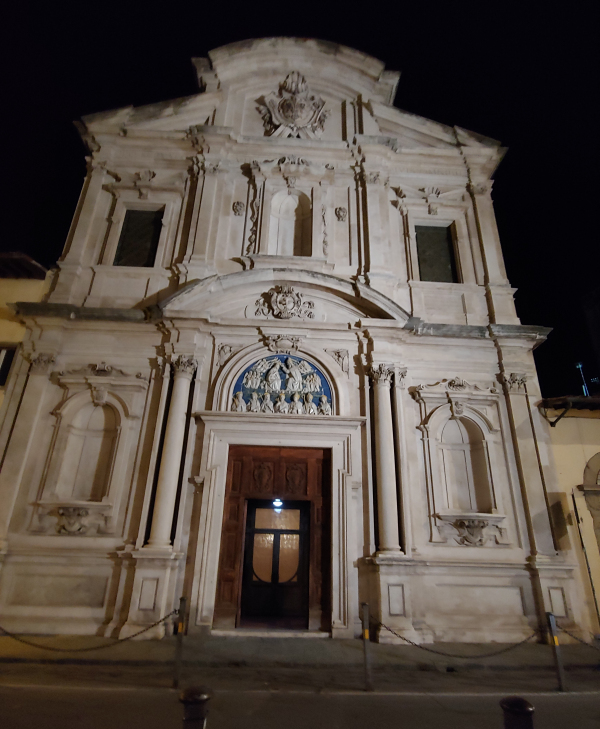 The interior of the church is beautifully decorated and well worth a visit. 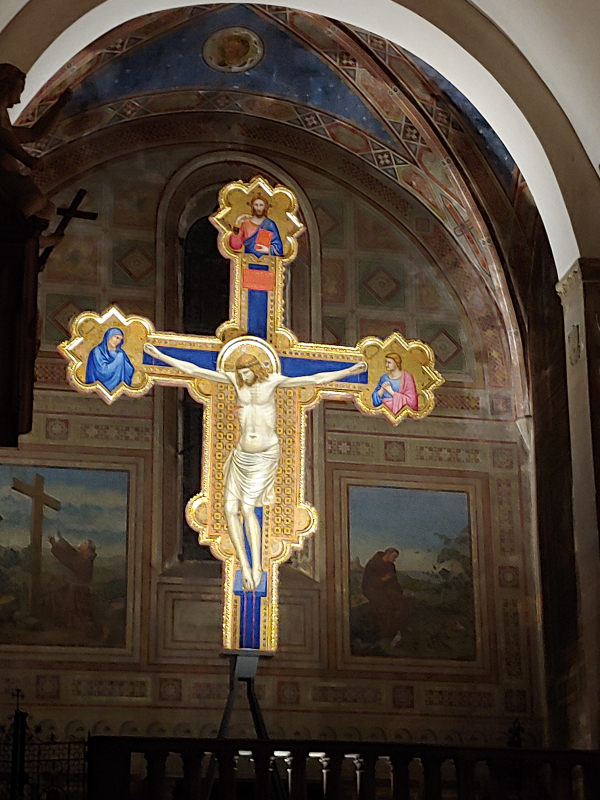 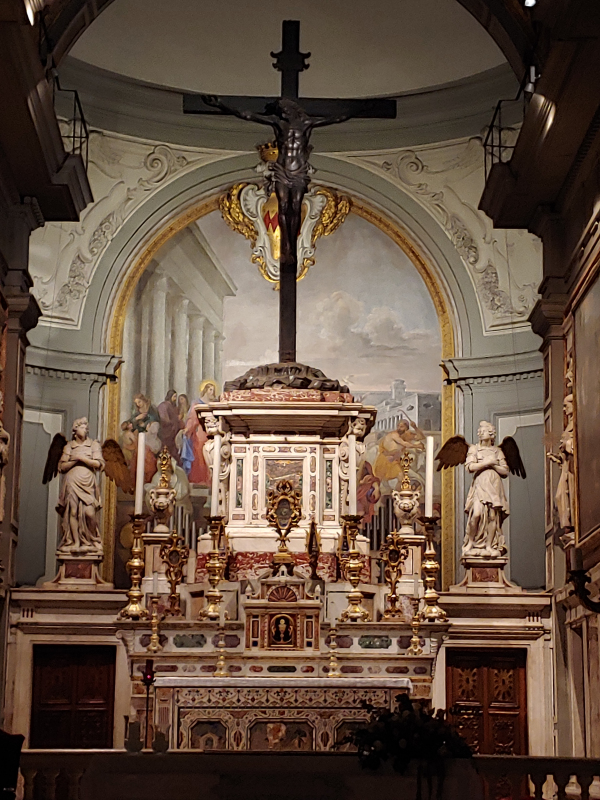 Today we crossed the river Arno by the Ponte Veccio to visit the Pitti Palace and the Boboli Gardens in Florence. The Pitti Palace was the home of the Medici family in the sixteenth century.

The palace hosts an impressive collection of artwork and the first part of the palace is laid out as an art gallery. 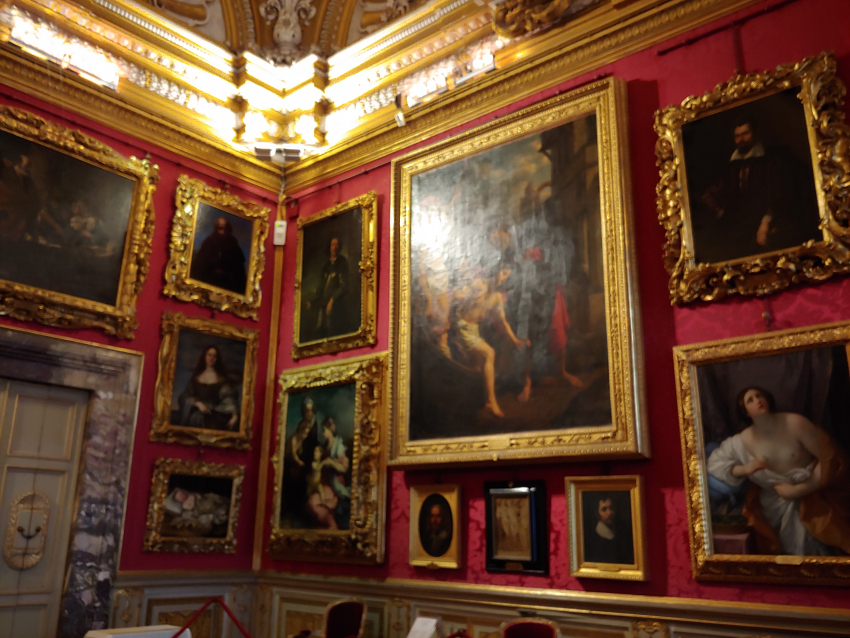 Sadly there were very few captions so we were not sure who the paintings were by or what they depicted.

The second part of the palace was laid out as it would have been back in the day. There were some notices to explain who used the various rooms but the details were scant. 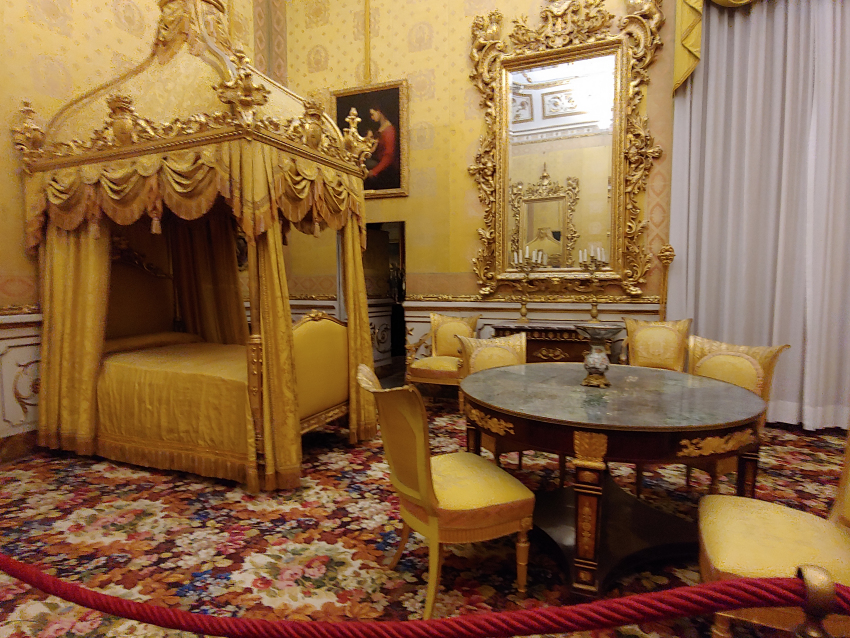 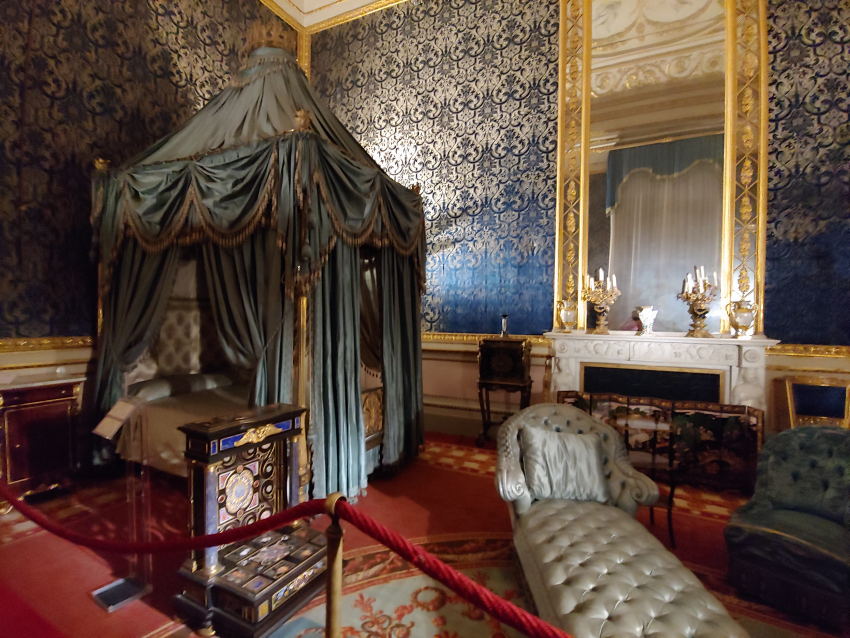 The grounds of the Pitti Palace form the Boboli Gardens. Construction began in 1550 for the Medici family. 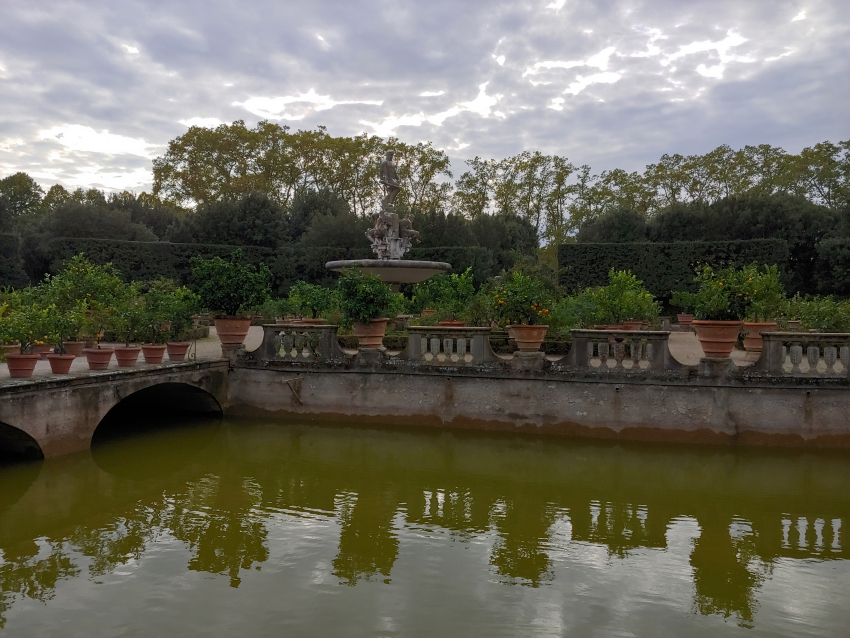 There are numerous classical statues and water features throughout the gardens. 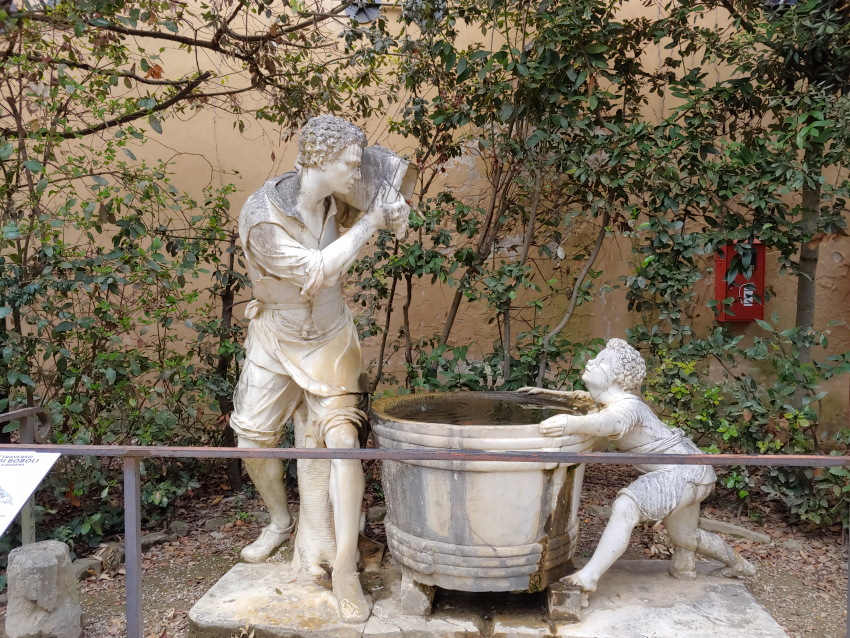 Today we said goodbye to Florence and took the train to Pisa. We got off at the Pisa S Rossore station which is a 10 minute walk away from the Piazza del Duomo. 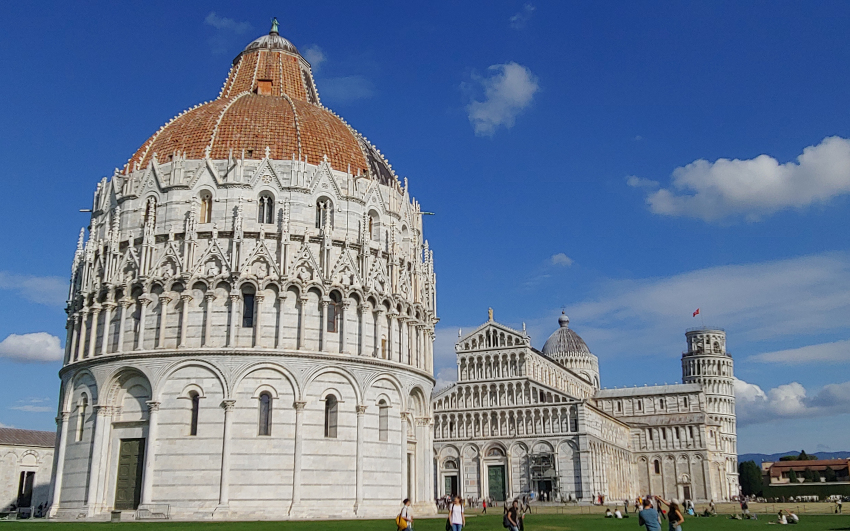 The main features of the Piazza are the Cathedral and the Leaning Tower of Pisa.

The ticket to climb to the top of the Leaning Tower (297 steps) cost 18 euros but included a free pass into the Cathedral. The top of the tower offers an amazing view over the complex and the area around Pisa. 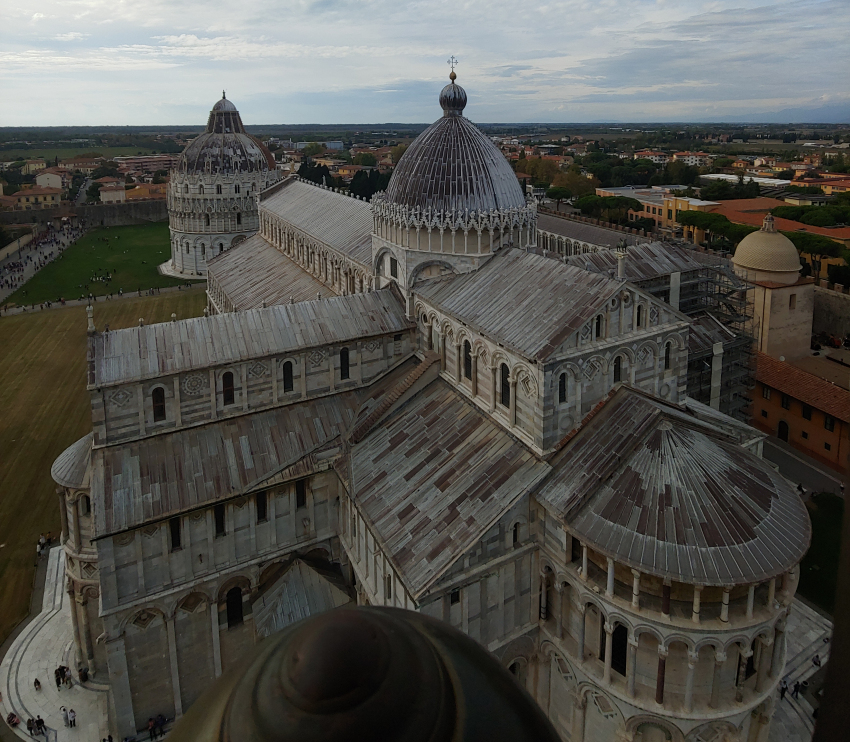 The interior of Pisa Cathedral is quite dark but beautifully decorated. 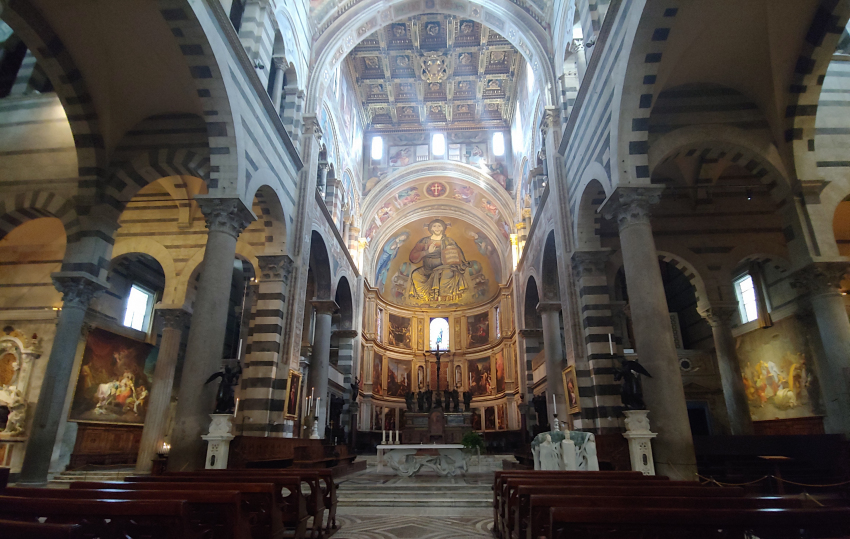 After taking a last look at the Leaning Tower of Pisa we left the Piazza and walked to the Pisa Central Station. At the station we took the Pisa Mover to the airport where we caught our flight back to the UK.