We flew with EasyJet to Venice and then took the Venice Express bus from the airport to the Piazzle Roma for €8,50. From there we took the Venice people Mover for €1,50 to the Marittima Port where we boarded our ship, the MSC Poesia.

Once on board, we were directed to the Pompeiana Restaurant on the 13th floor where we had lunch. It was very chaotic and there did not seem to be enough seats for all the people boarding but we did eventually find a seat and stayed there until we were able to get into our cabin at 4pm.

We did not book an organised trip because we felt that we could use public transport or walk to the main sights – the cathedral and the castle. However, as we left the port we discovered a tourist train trip that for €10 would take us to the main sights.

The trip took in the cathedral which features a large rose window at one end and the castle which was built by the Normans. We were also taken on a walking tour of the backstreets where we were able to see traditional pasta making. 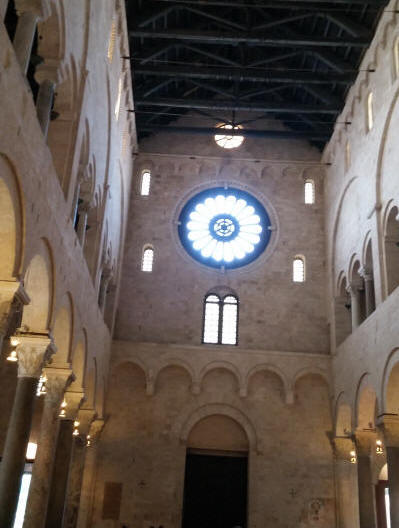 Our next stop was Katakolon in Greece and we had booked a trip to Olympia. Our guide, Demetrius, gave us a talk on the history of the Olympics before we reached the archeological site. Once inside we opted to leave our guide and explore by ourselves. 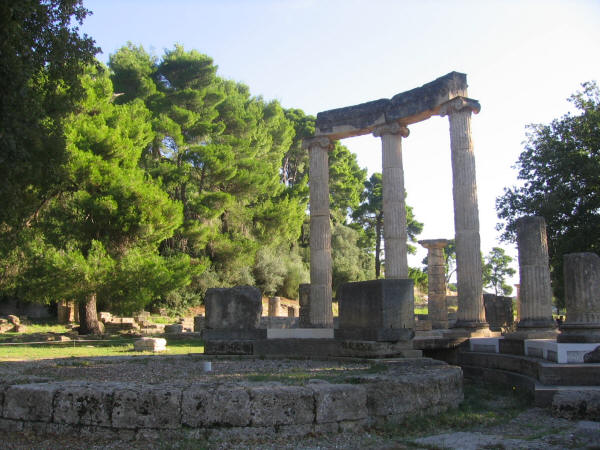 After seeing the ruins of the gymnasium, Zeus’s temple and the site where the olympic torch is lit we returned to our coach for the short journey to a local shopping street where we used our bartering skills to buy some new jewellery.

Our time in Izmir was limited so we booked an excursion to Mary’s house and Ephesus. On the way to Mary’s house our guide told us about Turkey emphasising its democratic state and the fact that they are not an Arab state. She then went on to tell us that a German nun called Kathleen had a dream about the location of the house where Mary lived in the latter part of her life and wrote letters to people telling them of the location. The house was subsequently found and the Pope confirmed that it was indeed Mary’s house. We queued up and filed through the house. 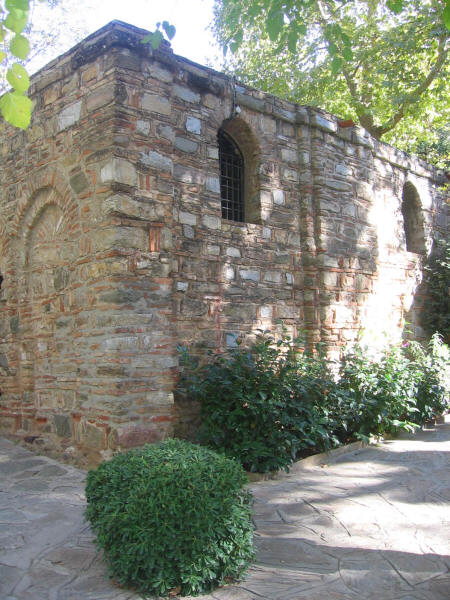 Leaving Mary’s house we moved on to Ephesus which was the capital of the Eastern Roman Empire. A lot of the city has been excavated and preserved. 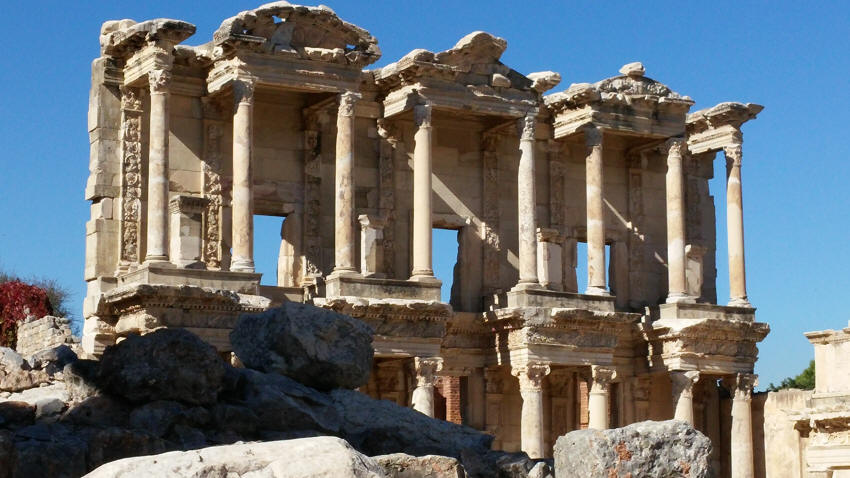 It was fascinating walking along the marble street viewing remains of the amphitheatre, the bath house, the temple and ordinary houses. Ephesus was by far the highlight of the cruise. 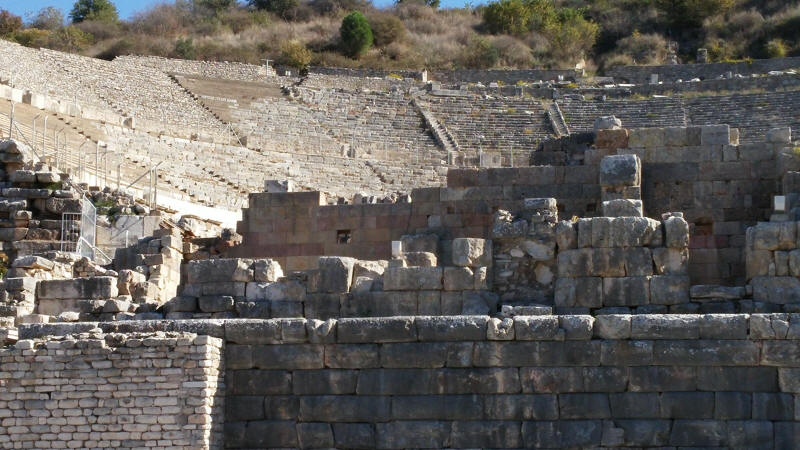 We had decided to take an organised trip in Istanbul and particularly wanted to see the Spice Market and the Grand Bazaar. As there were no places on the English speaking tour we joined an Italian speaking tour. Our first stop in Istanbul was the Sulieman Mosque. The bus had to park some distance away and we had a ten minute walk through the uneven streets to reach to mosque. Once there we put on headscarfs and removed our shoes before going inside the beautifully designed building. 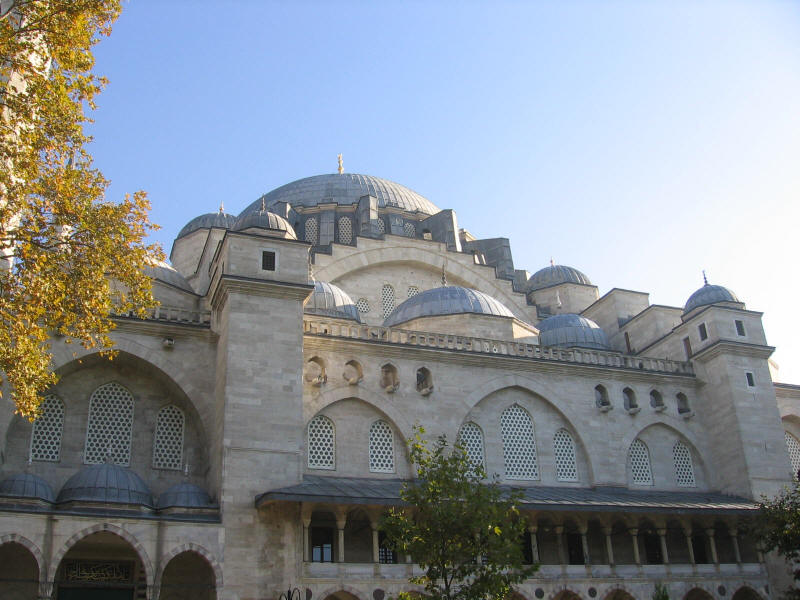 Leaving the mosque we returned to our bus and passed the Blue Mosque and the Sofia Hagia on route to our next stop which was a traditional Turkish carpet shop. Here we were given tea and shown a wide range of carpets that were for sale in the shop. Not wanting to purchase a carpet we left the shop and walked the short distance to the Grand Bazaar where we spent an enjoyable hour haggling for bargains. Then it was another bus journey to the Spice market where we spent the last of our Turkish Lira. 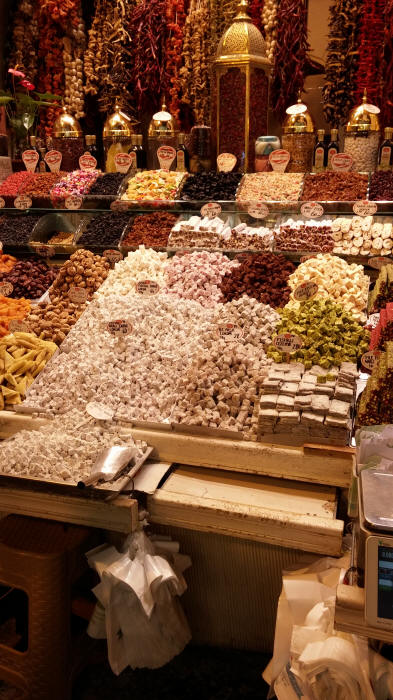 We arrived in Dubrovnik well rested after a day at sea. We had decided to visit Dubrovnik independently so after disembarking the boat we walked the short distance to the bus terminal which is just outside the cruise terminal. After purchasing a ticket (12 Kn each) we boarded the number 8 bus which took us to the cable car entrance. We then paid 108 Kn for a return cable car journey. We only had a short wait before we were taken to the top of the mountain overlooking Dubrovnik. The views are spectacular and after taking some scenic photographs we enjoyed a morning coffee in the restaurant.

After taking the return cable car journey we descended the steps to the right of the cable car building then crossed the road and went into the walled old town area of Dubrovnik. We spent time wandering through the beautifully clean streets and viewing the impressive walls and towers that are used to film parts of Game of Thrones. 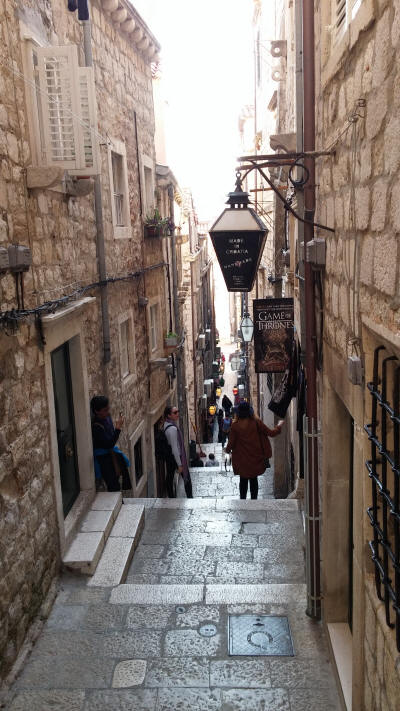 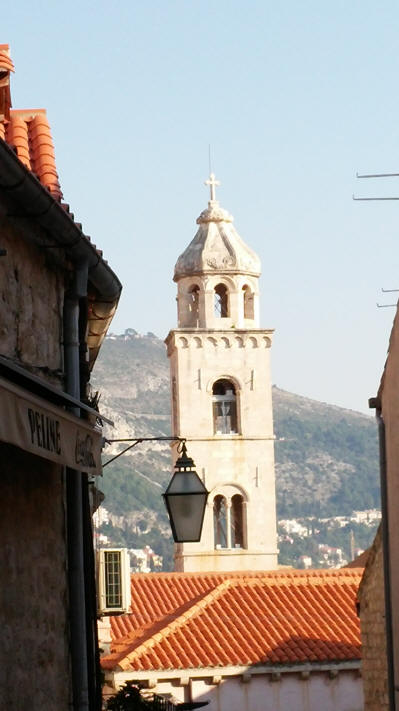 After spending some time sitting in the sunshine near the Pile gate before boarding the no 8 bus to take us back to our ship. We spent our remaining Croatian Kuna at the stalls just inside the cruise terminal.

We left the ship just after 11am and took the Venice People mover back to the Piazzale Roma where we purchased a water boat ticket to take us to Ca da ‘Ora. From Ca da ‘Ora it was a short walk to our hotel, the Bernardi Semenzato which we had booked for one night. After checking in we decided to walk through the streets to St Mark’s Square. Near the Rialto bridge we decided to take a gondola ride after being persuaded by the gondolier that we could have a long trip at the reduced rate of €80. Gondola prices are regulated by the government and cost €80 or €100 depending on the length of the trip. 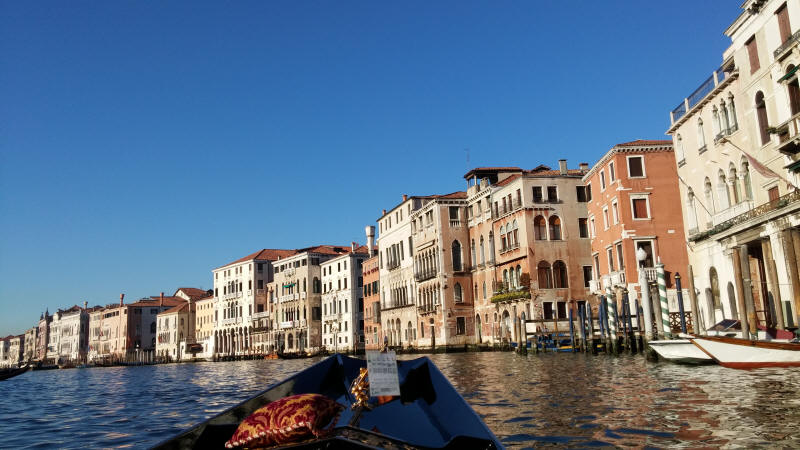 Our gondolier, Lorenzo, took us along the Grand canal and then through a maze of smaller canals pointing out the house of Casanova and the house of Marco Polo on the way. It was a bit of a shame that our gondolier spent time on his mobile phone and also shouting to other gondoliers rather than offering a proper guided tour but we did not let that spoil our enjoyment of this unique way to see Venice. 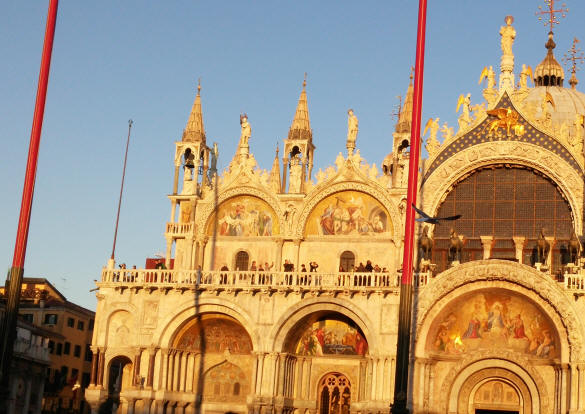 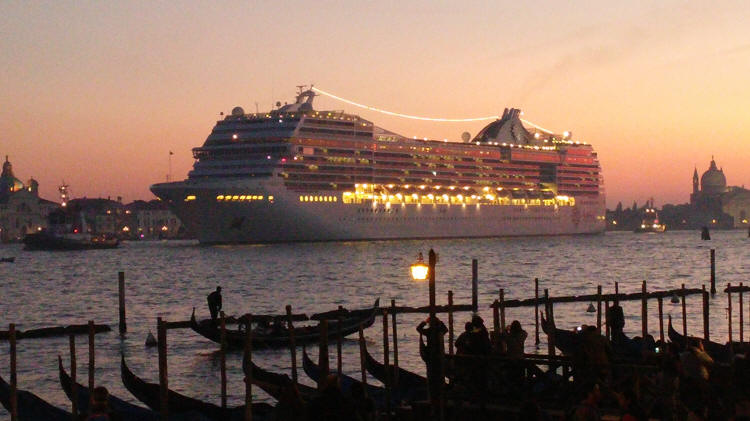 Leaving the cathedral we heard the sound of a ship’s horn and made our way to the jetty where we saw our ship setting sail and taking another group of passengers on the same itinerary. After watching the ship sail away we walked back to our hotel and after a meal in a local restaurant went straight to bed. The following day we had enough time to take the water boat for the length of the Grand Canal before collecting our bags and returning to the airport for our flight home.