We flew from Gatwick with Easyjet to Athens airport. It was an afternoon flight so we got good views of the landscape beneath us. However, we did not expect to see another Easyjet plane flying parallel to us at what seemed less than the regulation 5 miles. Nor did we expect to see a fighter jet fly through the middle of both planes at a very high speed. As we got off the plane we asked the Captain about the incident but he was very reluctant to talk and blanked us completely.

We arrived at 8pm Greek time and took the X96 bus to Piraeus on the outskirts of Athens. We got off the bus at the station and took a taxi to our hotel.

Our hotel, the Mistral in Piraeus was fine but a bit noisy. The advertised balcony was not a balcony at all and overlooked other rooms. However, we liked the roof bar which had views of the surrounding area.

Changing of the Guard 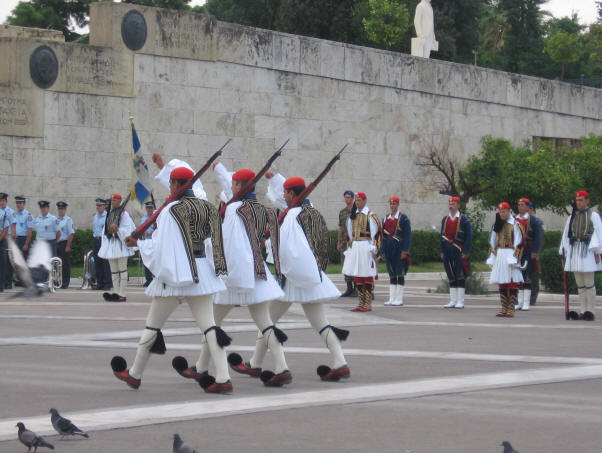 After breakfast we took a taxi to the Syntagma region of Athens where the Parliament Building is located. Then we found a good position to watch the changing of the guard which was scheduled for 11am.

The spectacle and ceremony of this event is definitely worth seeing if you are in Athens on a Sunday. Accompanied by a Police band the guardsmen march from their barracks to the Vouli. They keep in strict formation and are dressed in their national dress.

After performing some manoeuvres the two guards on duty were changed for two new guards. The national anthem was played and then they marched back to their barracks.

We left the Syntagma region and took a leisurely walk to the Monastiraki region which is famous for its range of outdoor stalls and flea markets. We wandered around the stalls and tables looking at a vast array of souvenirs, trinkets, jewellery and second-hand goods.

Towering above the Monastiraki Square are the ruins of the Acropolis and Parthenon. 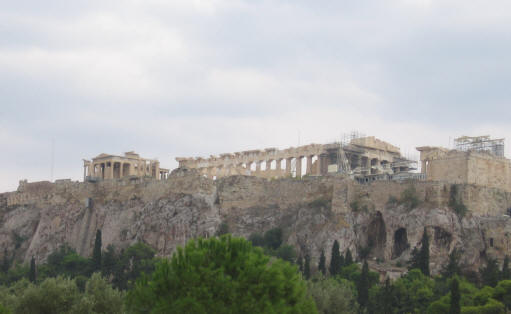 We decided not to visit the ruins but to climb to the top of the Filopappou Hill where you can see the iconic view of the Parthenon. 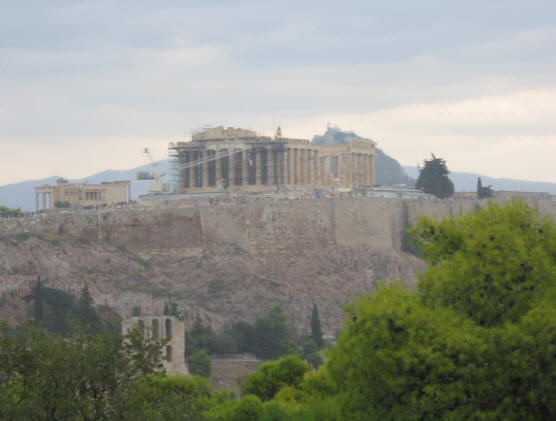 The path to the top of the hill is quite steep but their are resting places along the way. We found it very pleasant to take our time and stop frequently to take in the stunning views.

We descended the hill on the opposite side and found ourselves in a residential area of very steep streets. After walking for a while to get a feel of the area we took a taxi back to our hotel.

It had been our plan to eat at the hotel but after being told off by the hotel manager for taking a bottle of coke and packet of crisps into the hotel we decided to eat out. We found a nice restaurant and enjoyed a kebab platter.

Piraeus is a port and there are a number of marinas and bays in addition to the main port area. We decided to walk to the port and then take the metro into the centre of Athens. 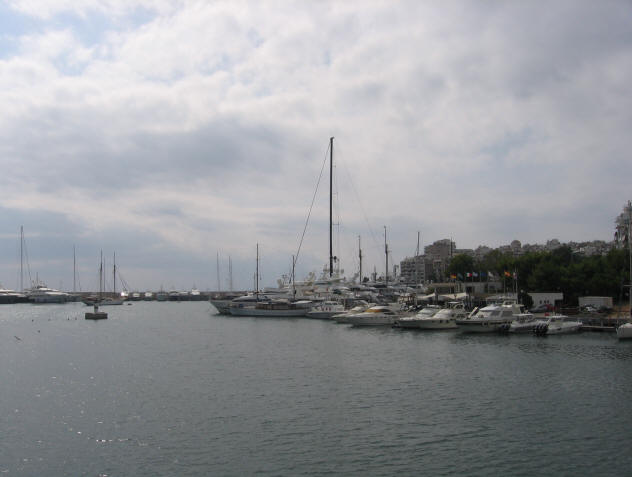 It was very pleasant walking in the warm sunshine taking in the views of the boats and yachts. However, after an hour our feet started protesting so we decided to take a trolley bus the rest of the way.

We boarded the number 20 bus which serves Piraeus and approached the bus driver to purchase a ticket. Buses in Athens do not sell tickets you have to buy them from ticket booths. This seems a peculiar system because the places selling tickets are few and far between. The tickets for public transport cost €1.20 and are valid for 70 minutes on any form of public transport. You can also buy a 24 hour ticket for €4.00

Next we took the metro from Piraeus to Omonia Square because we wanted to take a look at the fruit and cheese stalls. We also purchased a bigger bag so that the hotel manager would not be able to see what we had with us when we returned to the hotel.

After shopping we made our way to the Athens Adventure Rooms which at the time of writing are listed on Tripadvisor as the no 1 thing to do in Athens.

We had booked the Black Queen Adventure in advance. We were given a very warm welcome by the two girls that run the attraction and after using the bathroom we were taken into our room.

You have 60 minutes to escape the room by solving an array of puzzles, questions and other lateral thinking exercises. We came very close to completing the game but failed by one puzzle. It was certainly a very unique and enjoyable experience.

We had decided that we would like to see some of the nearby Greek islands and booked a full day mini cruise. It was not a cheap option at €80.00 euros each but with limited time in Greece it was the only way we could see several islands in one day.

We left our hotel at 7.15am in order to get to our boat in good time for the 8am sailing. Our taxi driver initially took us to the wrong port and then tried to charge us for his mistake but we eventually arrived at the correct location. We boarded our boat and took ourselves to the top deck where we found seats with a good view.

We left dock on time and were serenaded with Greek music. Having paid €80.00 for the day trip we were amazed to find that there were no complimentary refreshments, not even water. The boat charged €2.80 for a small cup of coffee. 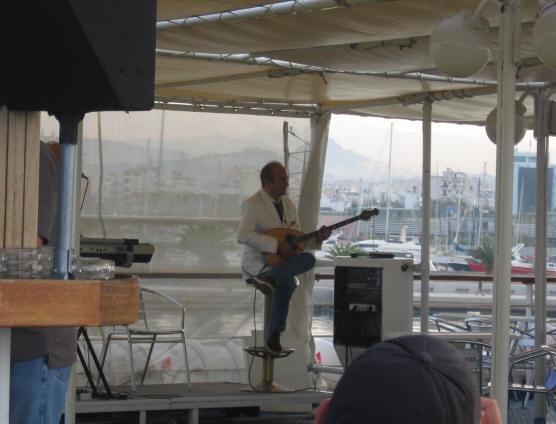 Our first stop was the island of Hydra. There are no motorised vehicles on Hydra and donkeys are used to transport things around the island. There were a number of donkeys standing around the dock area. I thought they looked rather sad, a product of animal exploitation. This highlighted the difference between the culture of this island and our English culture. 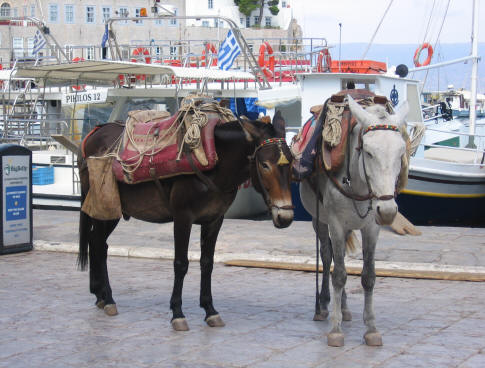 We had a look around the quaint, picturesque town but everything for sale had hugely inflated price tags. The sales assistants shadow you the moment you enter the shop which is quite annoying. Many of the clothes on sale were around  €100.00.

Throughout the four days we spent in Greece we had a real sense of the anger felt by the Greek people at the financial crisis they were in. It also felt like they were trying to get as much money out of tourists as a sort of pay-back for the trouble that they were in.

Once back on board we had a buffet lunch which was included in the price but there were no drinks included, not even water. After eating we returned to the top deck to enjoy the sunshine.

The second island we visited was Poros. From the boat this appeared to be another very picturesque and quaint town. 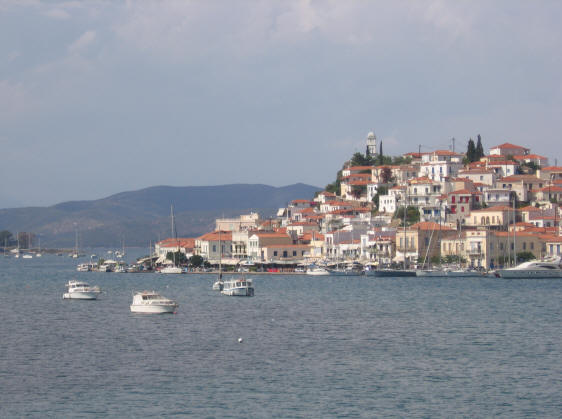 The day had turned very warm so we decided to stay on the boat, enjoy the warm sunshine and read our books. This proved to be a good choice because within minutes of leaving Poros the sky had darkened. Soon the winds increased and by the time we reached Aegina it was pouring with rain. 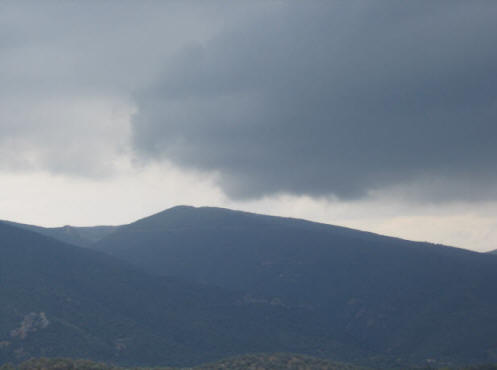 By now the rain was even worse and not good for sightseeing. Instead we took shelter in a port side cafe where we drank cups of hot chocolate and watched a Greek soap opera on the cafe television.

Back on board the going was quite rough as the storm continued. By the time we returned to Piraeus the rain had stopped, the wind died down and it was a warm and pleasant evening.

This was our last day in Athens. We checked out of our hotel at midday then took a bus to Piraeus. We then took the metro to Victoria square and walked a short distance to the Athens Archeological Museum.

The museum is home to an enormous collection of Greek archeological artefacts and spans a history from Prehistoric times onwards.

Our time in the museum was limited to 3 hours because we had to be at Athens airport by 6.30pm. Although this was enough time to get a general overview it was not enough time to see everything the museum has to offer. Nevertheless it was well worth the €7.00 entrance fee. Furthermore it was a wonderful feeling walking through such a vast array of ancient artefacts.

We left the museum at around 5pm and made our way back to Victoria Station where we took the metro to Monastiraki. Here we changed lines to take a train to the airport. It was very straightforward and cheap travelling on the metro and I would recommend it for anyone travelling in Athens. Thankfully the flight back was not as eventful as the flight out. However, when we returned to Gatwick the police boarded our plane and arrested a passenger.